Longitudinal Slices of an Embryo at 10 days 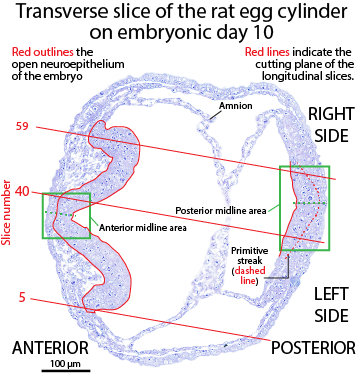 Below is an array of 12 longitudinal slices through the egg cylinder of a rat on E10.  The embryo is cut first on the left side (slice 3), through the midline area, and then on the right side, finishing with slice 69.  The picture to the right shows the approximate orientation of the longitudinal cuts on a transverse slice of another E10 embryo.  The slices are angled (red lines) so that the anterior end is heading inward toward the right side, while the posterior part of the slice is heading outward toward the left side.  The green rectangles indicate the regions of the longitudinal slices that appear to be in the midline area.  The green dashed line in each box is the actual midline.  The midline is always easy to spot in transverse slices—not so in longitudinal slices.  Notice that the midline is offset between anterior and posterior sides.  That is because the midline is never a straight line; it always tilts and bends.  The midline is set during the process of gastrulation when mesodermal cells move inward in the center of the primitive streak.

You can download a pdf copy of the image to the right by clicking on the link.  E10 longitudinal info

The archive folder, which contains ALL of the scanned sections, can be seen with this link