Transverse Slices of an Embryo at 10 days

Below is an array of 13 transverse slices through the bottom half of the rat E10 egg cylinder.  The embryo is a U-shaped structure that is cut from top to bottom (slices 1 through 58).  Each slice cuts through the embryonic body twice—front and back.  The picture to the right shows the approximate orientation of the transverse cuts on a longitudinal slice of another E10 embryo.  The slices are angled (red lines) so that the anterior end is heading downward, the posterior part is heading upward.  E10 is during the latest phase of gastrulation when mesodermal cells move inward in the center of the primitive streak (only visible in the posterior 1/3 of the embryo).

The neuroepithelium (outlined in red) is composed of columnar mitotic cells that will form all of the cells specific to the nervous system.  These include nerve cells (neurons) and their supporting cells, glia.  On E10 the neuroepithelium is completely open and forms a prominent U-shaped structure composed of columnar cells on the dorsal (upper) surface of the embryo; anteriorly it forms a curved hump, the head folds of the future brain, posteriorly it is a narrow plate, the future spinal cord.  The primitive streak lies beneath the posterior spinal cord—possibly the lower thoracic, lumbar, and sacral areas. There is no neural tube or somites (discrete boxes of mesoderm on either side of the posterior brain and spinal cord).

You can download a pdf file of the image on the right by clicking on the link.  E10 transverse info

We also have an ARCHIVE FOLDER that contains jpg files of EVERY SLICE of this specimen.  Click here to view the images. 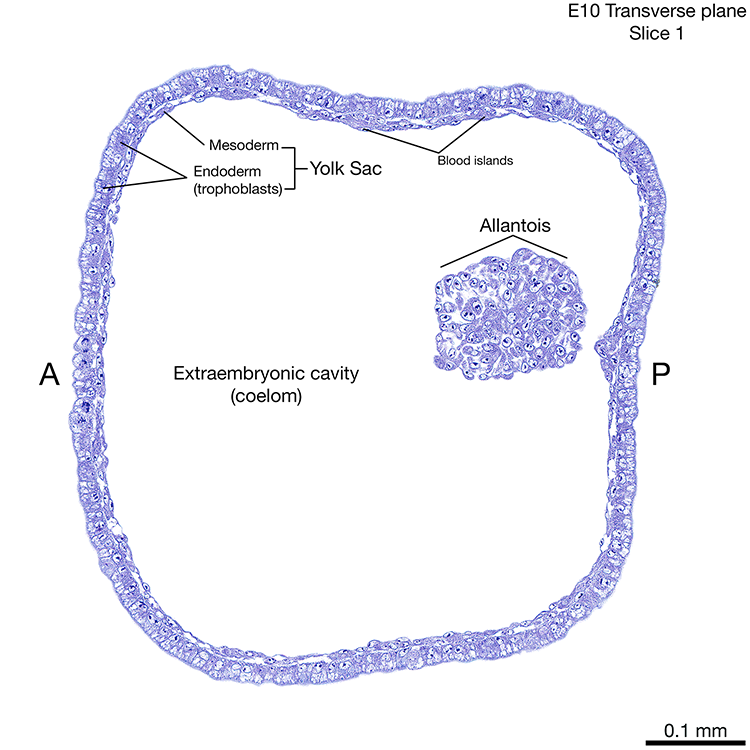 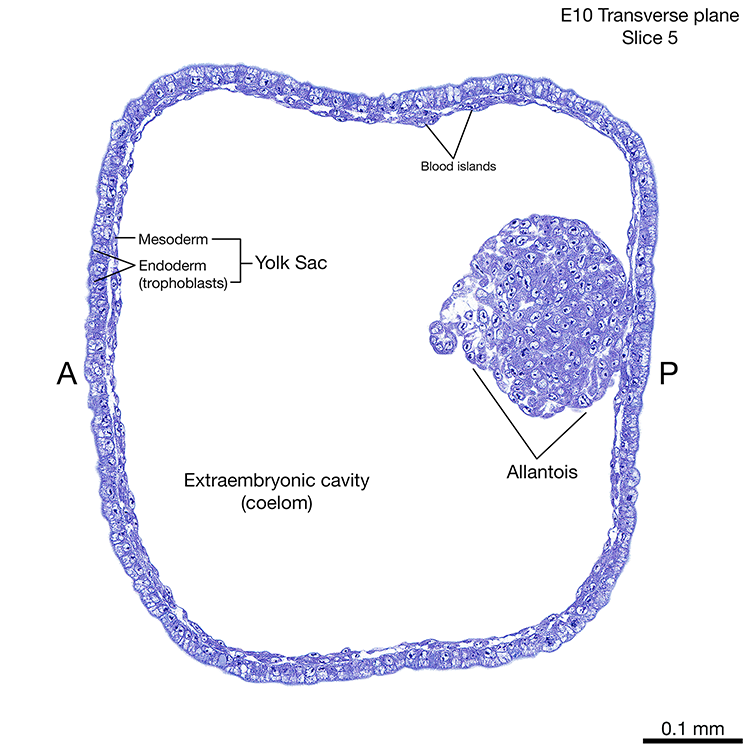 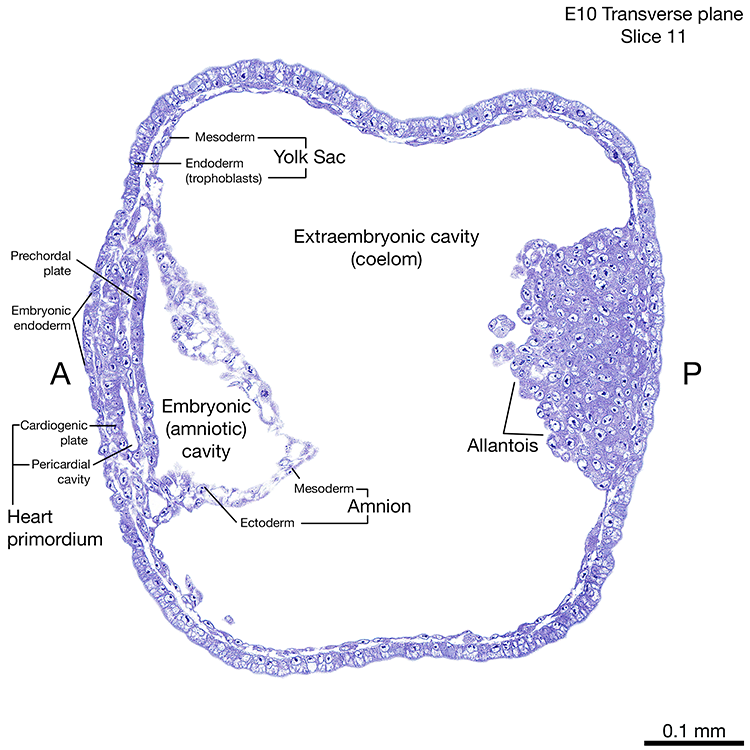 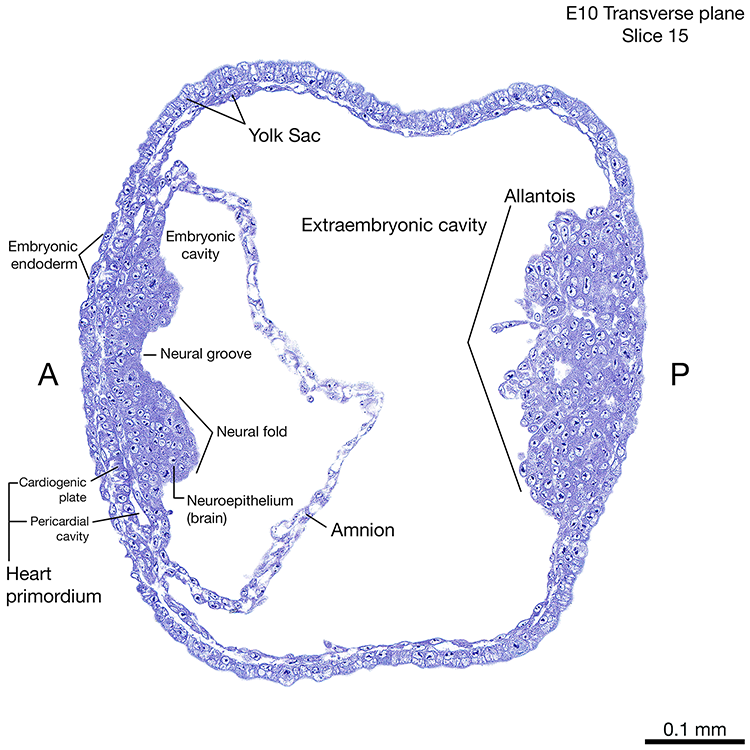 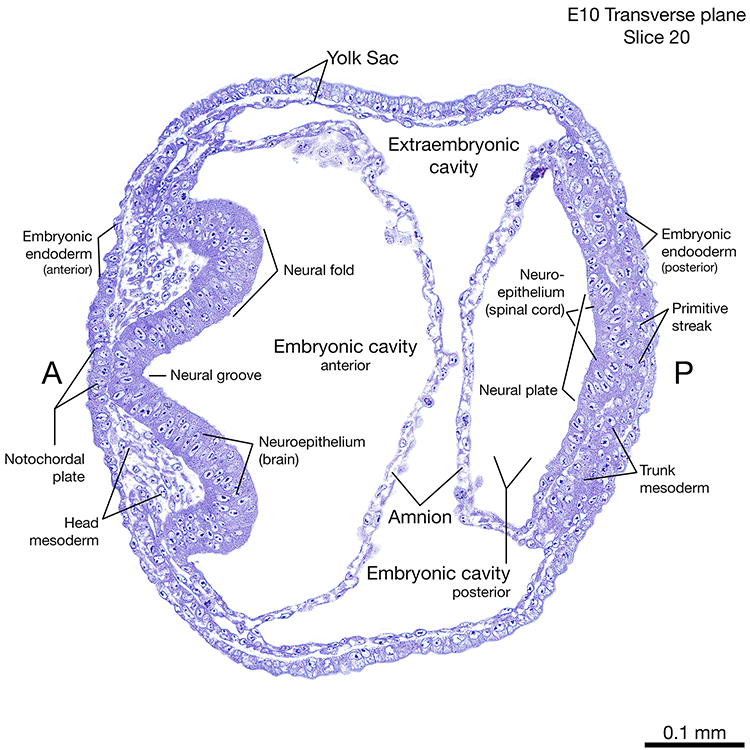 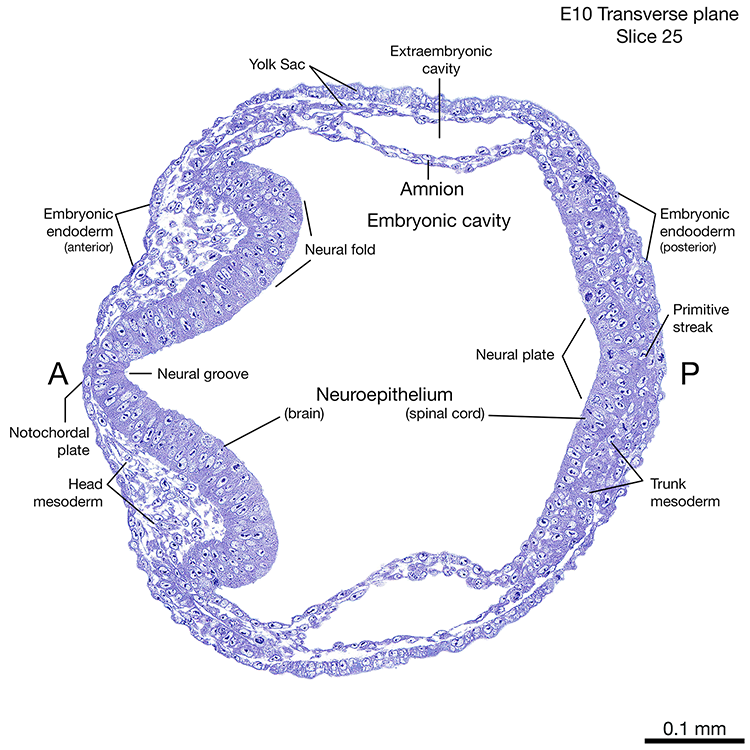 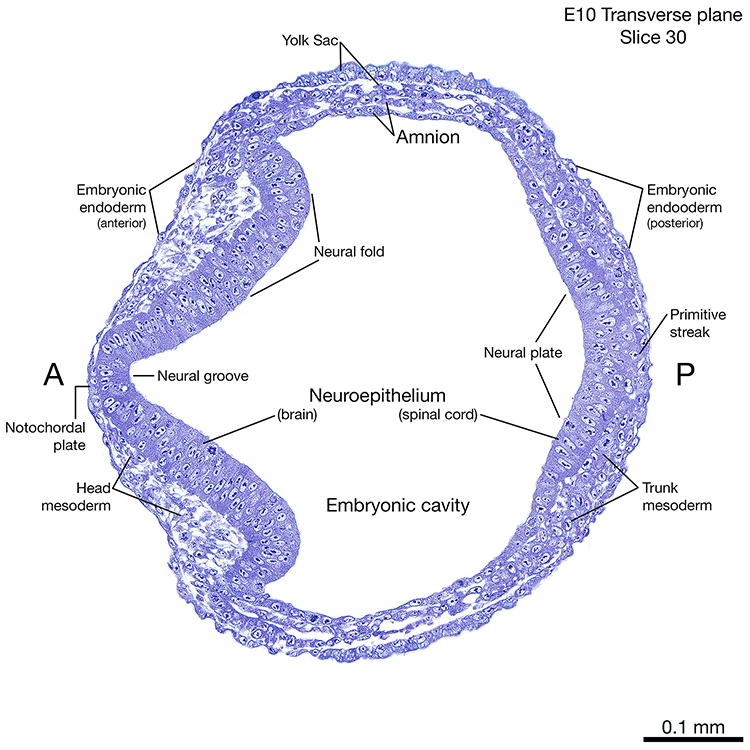 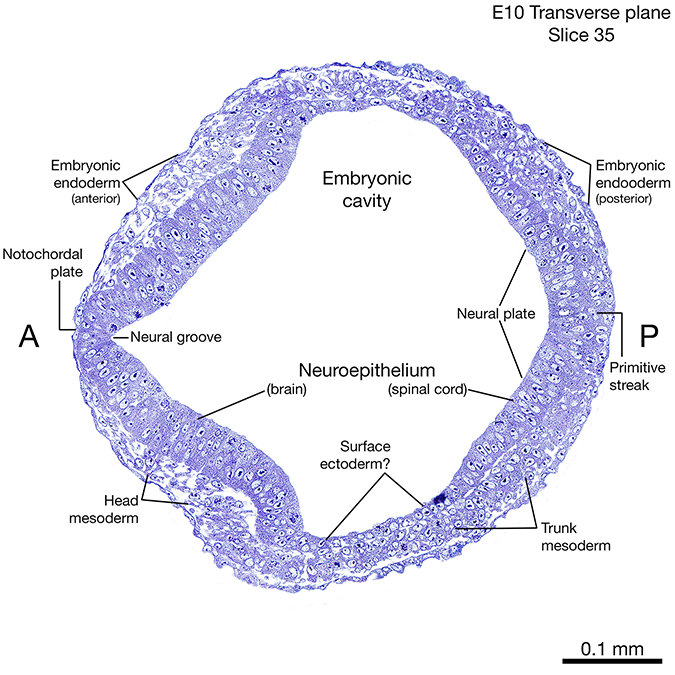 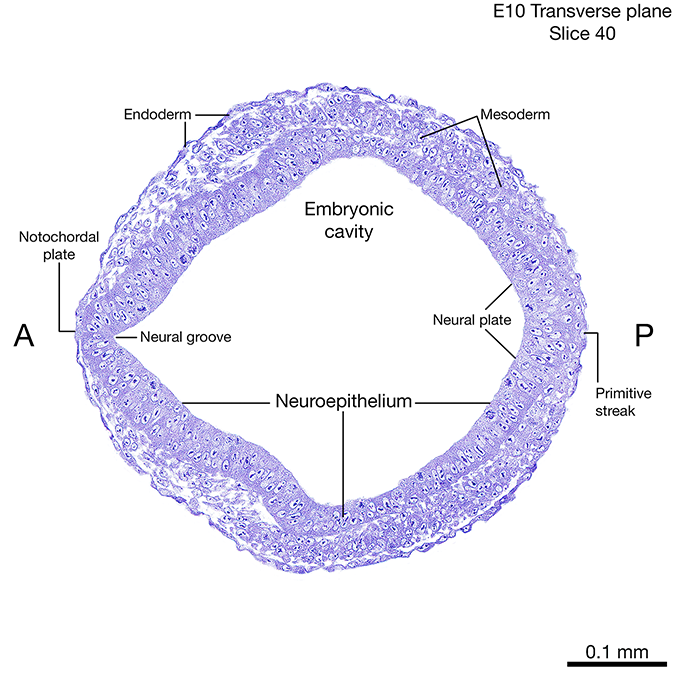 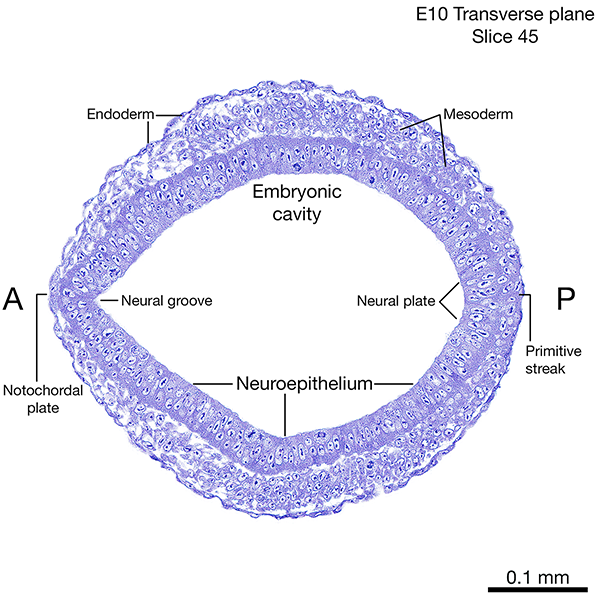 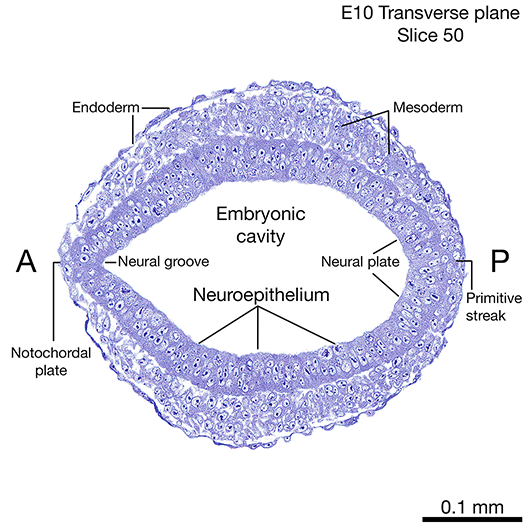 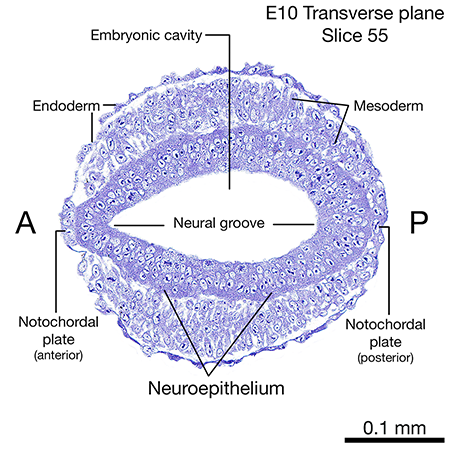 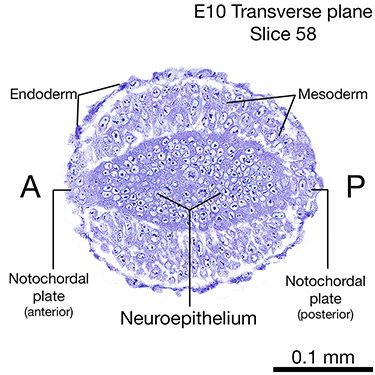