The entire egg cylinder was embedded in methacrylate and nearly every 3µm slice was preserved on microscopic slides and stained with toluidine blue.  The 21 high-resolution images below go from the dorsal posterior spinal cord near the primitive streak (slice 5), through transverse cuts of both the brain and spinal cord, to the base of the neural groove (slice 87).  The illustration below shows the approximate cutting plane and location of slices 33, 55, and 80 on a longitudinally-sliced rat embryo at the same age.

In place of repetitive comments for each of the slices, we will discuss the general characteristics of this embryo and provide no captions for the zoomified images below.  The embryo itself is a U-shaped structure at the base of the egg cylinder.  The uterine tissue surrounding the egg cylinder was erased from the image with photoshop, carefully preserving the double-walled yolk sac: endoderm on the outside, mesoderm on the inside.  The space around the outer limits of the yolk sac wall is the yolk sac cavity.  The embryo develops inside an amniotic cavity surrounded by a thin, double-walled membrane, the amnion: ectoderm on the inside and mesoderm on the outside.  Both the yolk sac and the amnion have erratic folds caused by tissue shrinkage during fixation and dehydration prior to embedding.

The nervous system is our chief interest, and most of the annotations in the images below refer to that.  At this stage of development, the neural plate is open throughout the entire neuraxis from the forebrain part of the head fold to the area where the primitive streak continues posterior to the spinal cord.  There is no neural tube, and no neurons have been generated.  Instead, the dense cells in the neural plate are the stem cells that will generate neurons, glia and other cells specific to the nervous system—the neuroepithelium.  The neural plate has a deep groove in the midline.  In this specimen, the midline itself twists from posterior left to anterior right because the embryo turns as it grows.  The midline in the brain is at a different angle than the midline in the spinal cord.  This is easy to see in nearly every transverse slice.  In addition, nearly every slice shows the notochordal plate in the midline.  The notochord always marks the midline area and extends from the most posterior spinal cord to the midbrain.  The anterior midbrain and the forebrain do not have a notochord, but they still have a deep groove in the midline.

The other labeled parts of the slices are taken up with defining different parts of the mesoderm.  This specimen has two definite somites; these are discrete blocks of mesoderm that form from the paraxial mesoderm.  The earliest somites are located at the junction between the most posterior hindbrain and the cervical spinal cord.  The neural tube will close first in this area.  (By the morning of E11, the neural tube is closed from the central spinal cord (thoracic area?) to the midbrain, leaving the anterior neuropore open in the forebrain, and the posterior neuropore open in the future lumbar and sacral areas of the spinal cord.) 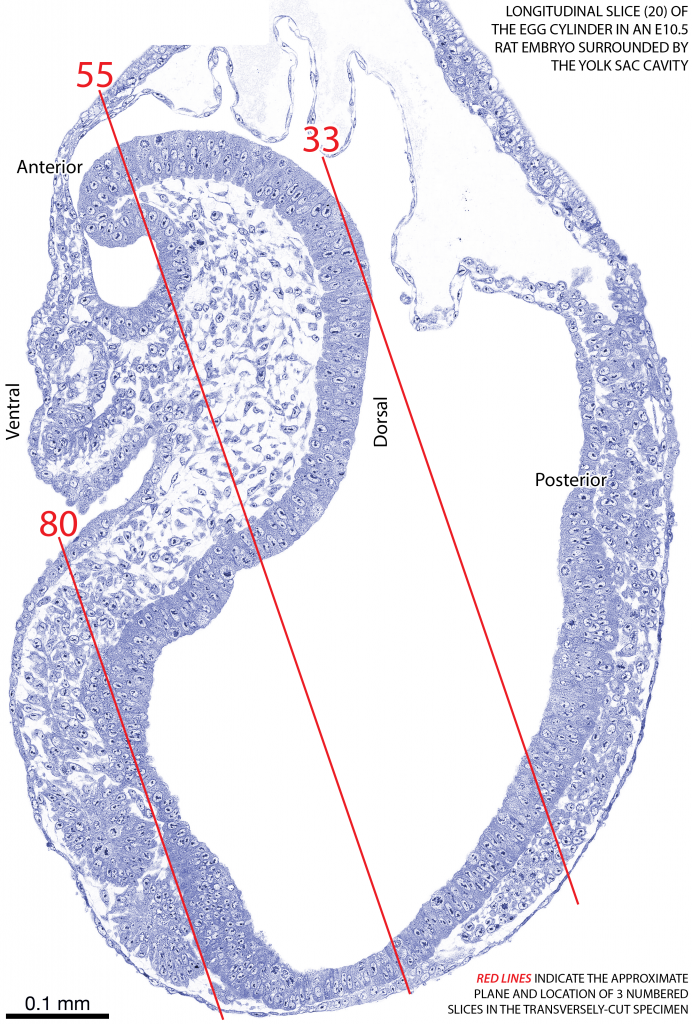 All of these structures are labeled in the slices below.  By clicking on one of the thumbnails, a new tab opens in your browser that allows you to view the entire slice or to zoom to the highest magnification and see individual cells in the neuroepithelium.  There is a navigator within the view window showing a box indicating what part of the slice is in the window.  Move the box to an area of interest to see different parts of the slice, especially helpful at the highest magnification.  Clicking on the “Z” at the bottom of the window returns the view to the entire slice. 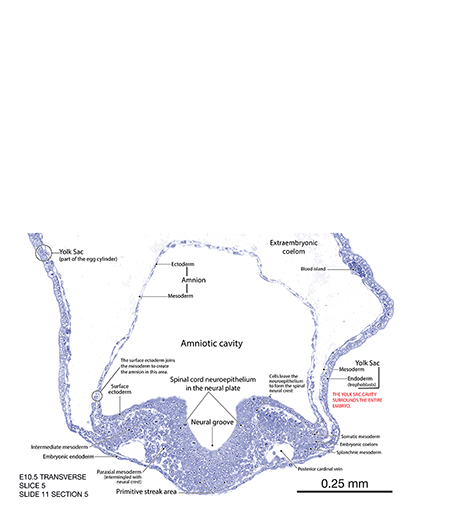 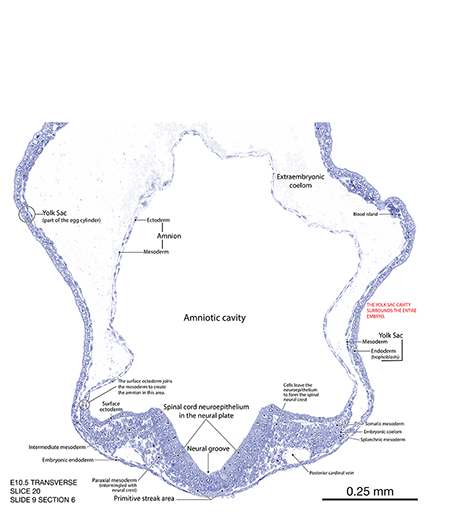 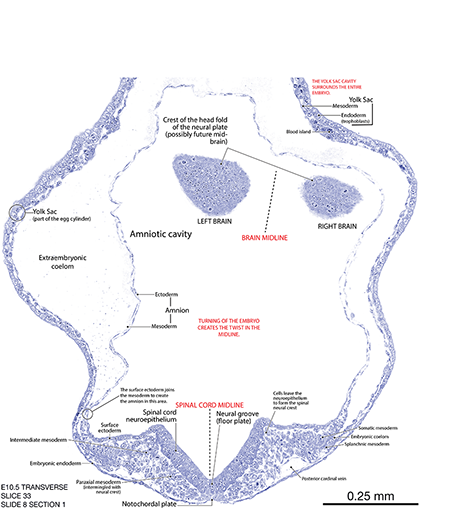 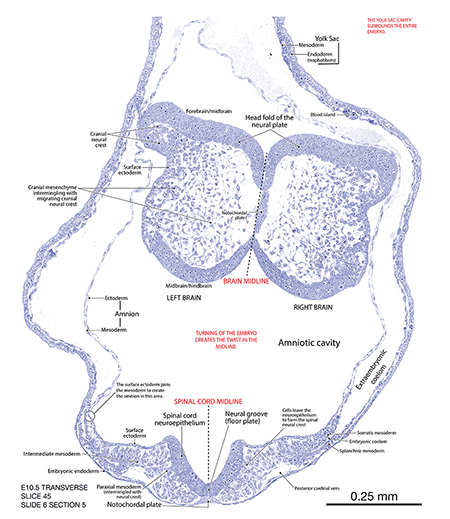 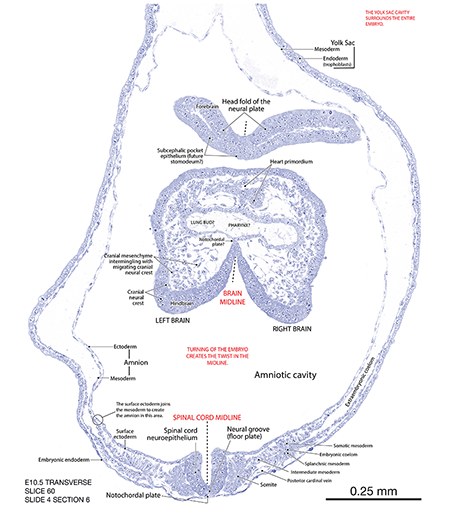 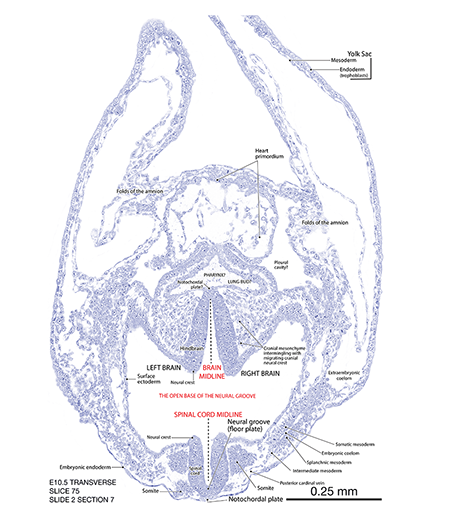 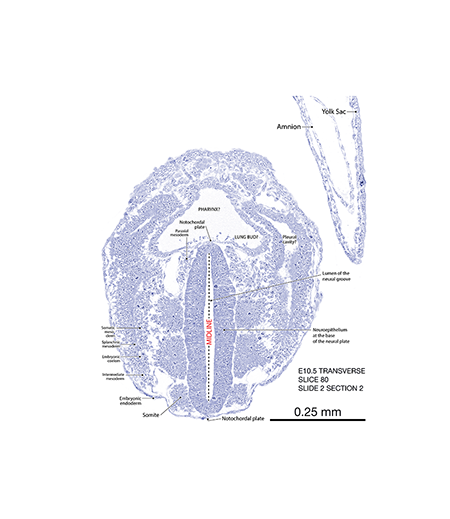 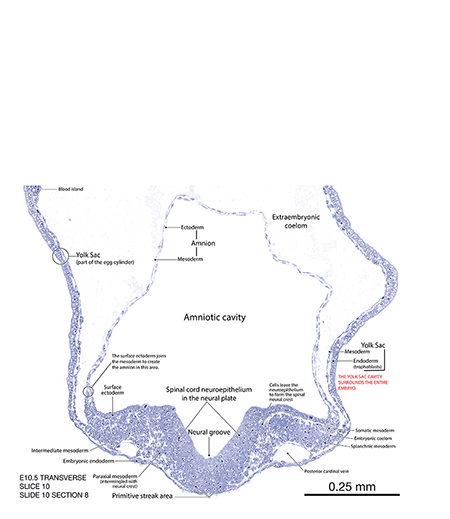 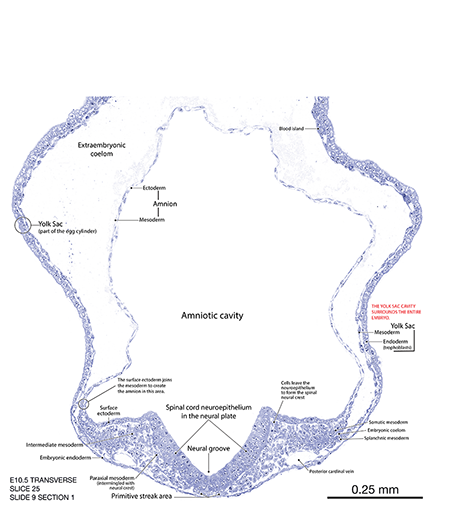 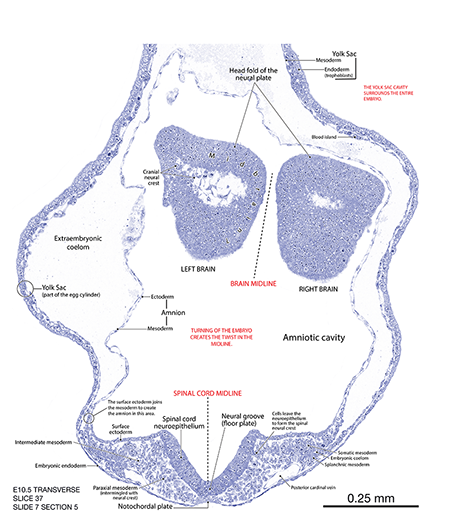 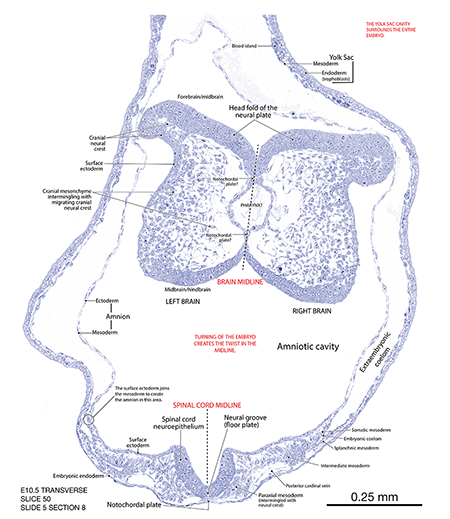 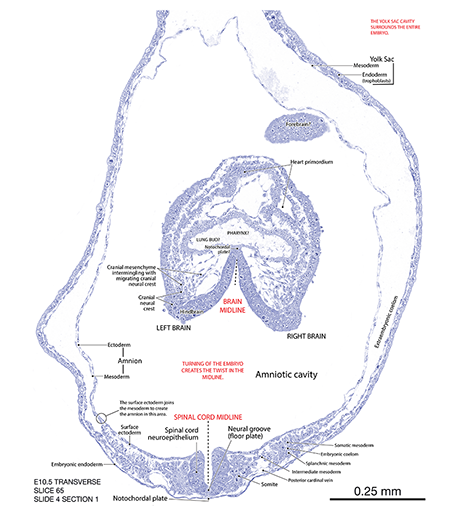 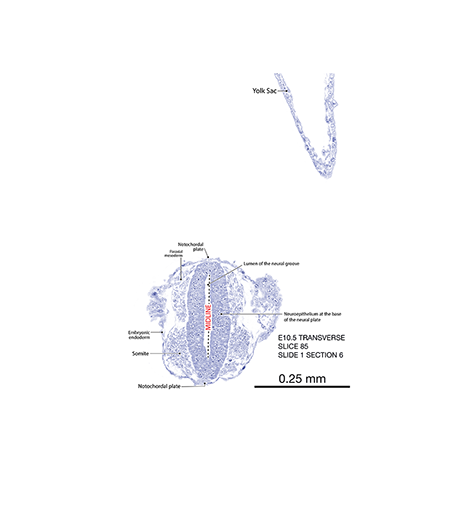 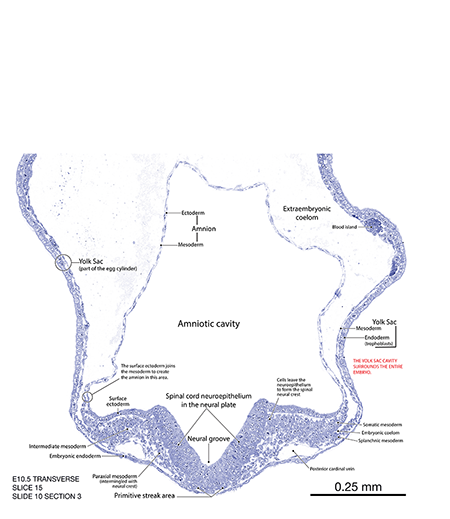 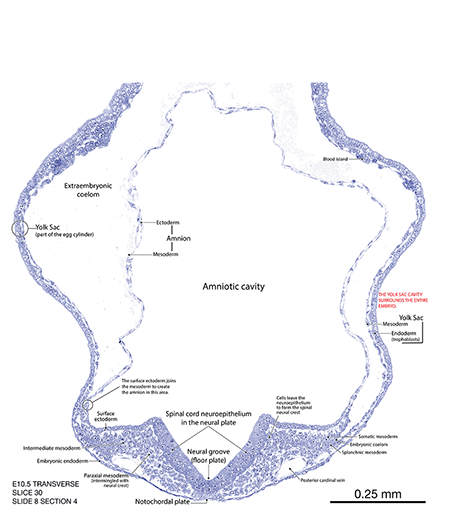 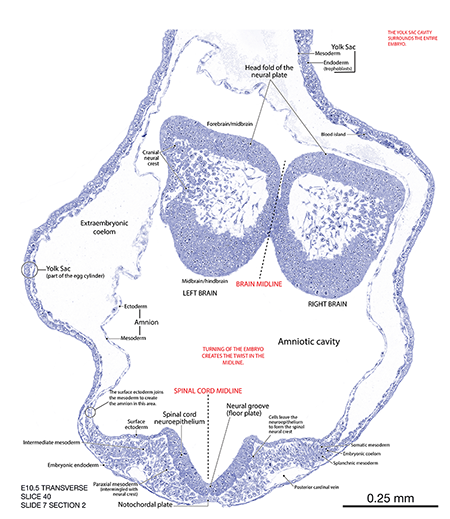 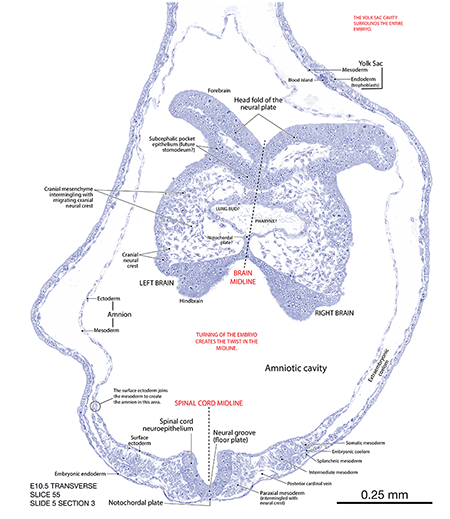 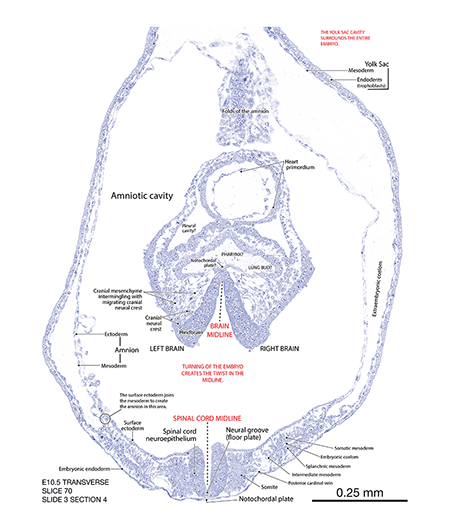 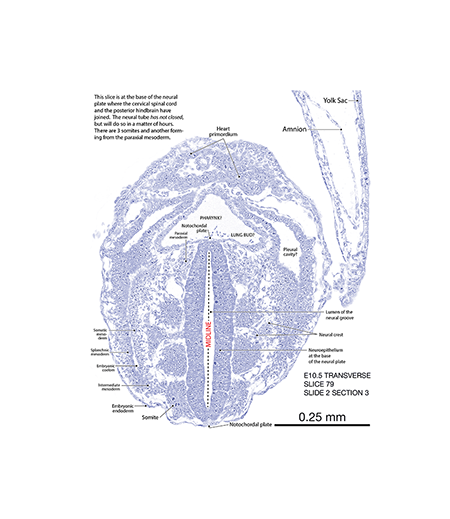 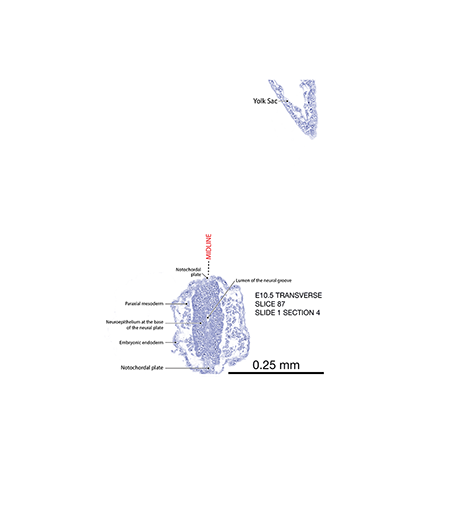